Gender equality slowly increasing at the top of Norwegian businesses 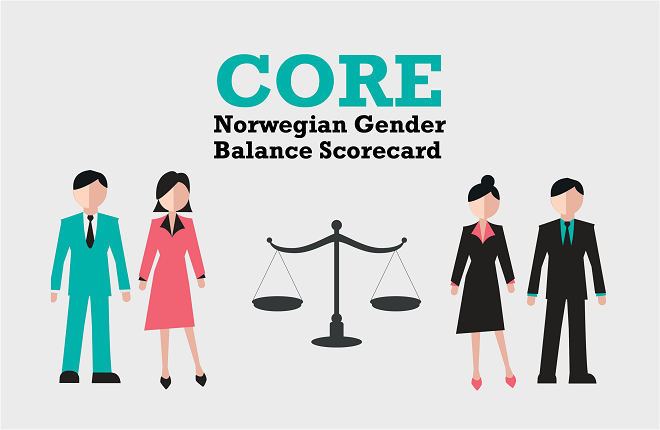 Every second year, CORE Norwegian Gender Balance Scorecard maps the status of gender equality at the top of the 200 largest Norwegian companies. This year's numbers show that the proportion of women in executive committees has increased slightly over the last couple of years, but this increase is marginal, says CORE researcher Sigtona Halrynjo.

“On average, women make up one fourth of the executive committees, which is up from 22 percent two years ago. At the very top, among CEOs, the proportion of women is 14 percent, compared to 10 percent in 2018,” Halrynjo explains.

Critics of gender equality regulations such as quotas, argue that gender balance at the top will follow naturally as companies hire new managers. However, the numbers from the Norwegian Gender Balance Scorecard does not necessarily support this argument.

The chairs of boards typically have a CEO background, with experience from operational positions, such as business heads and division directors, with profit and loss responsibility. Women make up only 18 percent in such positions. This is an increase from 15 percent in 2016, but if progress continues at this pace, we will have to wait until 2060 before we have as many women as men in these positions.

In staff/support positions, there is already gender balance and 58 % women. However, most positions in the executive committee are operational positions. Having operational responsibility is also required to qualify for a CEO position. Thus, more female leaders in HR and communication will not necessarily contribute to a better gender balance.

In 2005, the government took action to promote gender equality in the business sector, introducing gender quota regulations on the boards of public limited companies, cooperatives, inter-municipal companies, state-owned enterprises, savings banks and mutual insurance companies. The hope was that this would have a transmissive effect, and lead to an increased proportion of women in executive committees as well.

In boards subject to gender quota regulations, the effect is clear: on average they have 43 percent women, compared to 19 percent among companies without such regulations. However, in executive committees, the proportion of women is about a quarter in both groups of companies.

“Maybe it is time for fresh thinking when it comes to which actions will result in more gender equality,” Halrynjo says.

Halrynjo calls for increased attention to the conditions for building careers in the business world, and refer to the findings from two recent CORE reports where career and salary development of men and women in the financial sector and among economists with a master's degree were analyzed. The reports show that there are significant gender differences when it comes to work/family balance in practice. This is despite the fact that many of these men and women have similar family and career preferences.

“The result is, that even though women and men face equal demands at work, they often have different conditions at home,” Halrynjo explains.

Having the main responsibility at home, as many mothers do, makes it even more challenging to build a career with operational experience and performance responsibility, which typically means a lot of overtime, availability for customers, and an unpredictable travel schedule.

“Maybe we should complement the board quotas' top-down perspective with active efforts to build long-term career paths that both men and women can combine with a good family life throughout different life stages,” Halrynjo suggests.