The return of rejected asylum seekers plays a pivotal role in the EU’s new proposed migration pact, says our researcher Erlend Paasche. He was recently invited by the EU Commission to present his research in this field. 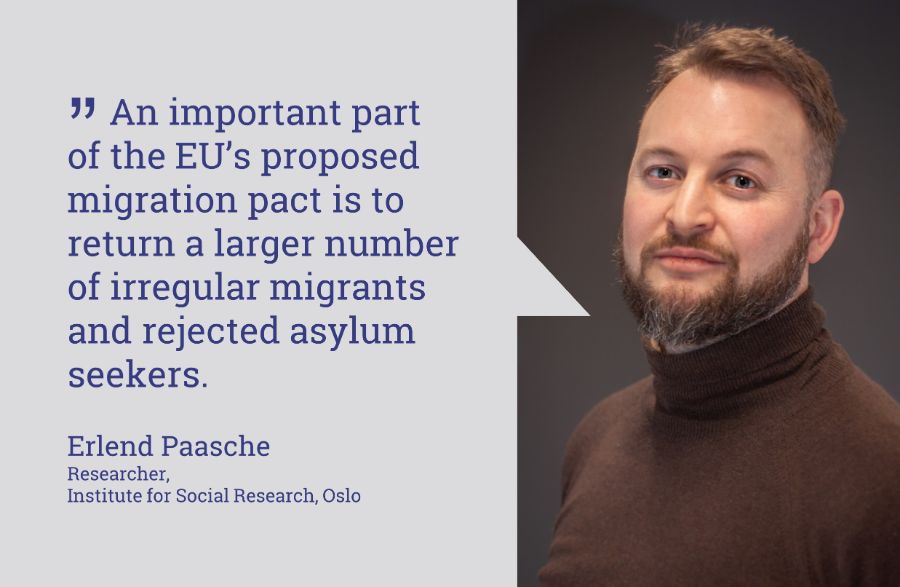 The migration streams to Europe in 2015 exposed flaws in the EU’s asylum and migration policy leading to demands for reforms and improved cooperation. Five years on, the EU Commission has recently put forward a proposal for a new migration pact. This overarching strategy also includes the EEA countries and Norway, and sets out a change of direction. The ambitious goal is that the Member States shall adopt the pact during the course of the year.

An important part of the proposed migration pact is to put in place a better system for returning irregular migrants and rejected asylum seekers. The EU Commission recently invited Erlend Paasche, a researcher at the Institute for Social Research in Oslo, to speak at a meeting about policy developments and ways forward. The audience consisted of high-ranking officials in the European Migration Network, as well as representatives from civil society and the UN.

“The migrants affected by this return system perceive it—not surprisingly—very differently than the politicians who design it, yet they are rarely listened to. It is therefore crucial that those who create a new system are open to critical perspectives from academia,” says Erlend.

Gap between rhetoric and reality

The meeting formed part of the preparatory work for the EU Commission’s new strategy for so-called ‘voluntary assisted return’ whereby irregular migrants and rejected asylum seekers receive incentives to comply with the duty to leave and travel back to their country of origin. The topic of Erlend’s talk was the gap between rhetoric and reality in this field, and why decision-makers need to know more about the experiences of migrant returnees with such programmes.

Erlend, a sociologist, has lived in the Middle East for many years and carried out fieldwork in Syria, Iraq, Kosovo and Nigeria. During this period, he has met many migrants after they were returned from Norway and Europe, and many who had tried to avoid being returned.

Requires a lot from migrants

The European return system aims to make it more attractive for migrants who are not granted permanent residency in Europe, and perhaps lack means to reintegrate themselves in their country of origin, to return. Among other things, return migrants may receive some limited financial assistance intended to facilitate their reintegration.

In Norway, such reintegration assistance is individually adjusted so that it rewards those who apply for assisted return within a given deadline for departure. Families with children, and migrants who are considered especially vulnerable, may receive additional assistance. In some countries of origin and for some groups, the Norwegian authorities fund third party service providers to provide practical help in finding work, education and housing. Although such assistance is rarely the determining factor, the intention is to make it easier to choose assisted return.

“Little attention is paid to what is required of the migrants to get the assistance they are promised in Europe before departure. Heavy reintegration bureaucracy with many control mechanisms leads to delays and frustration among return migrants,” says Erlend. In cases where such control mechanisms become excessive, he believes it may be considered a breach of promise on the part of European states.

"A successful return policy relies in part on the creation of solid legal and human rights frameworks, but we also need to understand why migrants resist being returned."

In addition, he underlines that migrant returnees are a more diverse group than what they are often portrayed as. Their ability and willingness to reintegrate in the country of origin varies.

“In reality, some want to reintegrate into the country of origin and others do not. Furthermore, some have the ability and resources to actually succeed with reintegration, whilst others do not. European politicians have limited room to manoeuvre.”

Goal to increase the number of returns

A key part of the European migration policy has been the so-called Dublin Regulation, which states that an application for asylum shall be handled by the first EU country the asylum seeker arrived in. This has put considerable pressure on the countries near the EU’s external borders where many migrants arrive, such as Greece and Italy.

At the same time, many countries have a very ineffective return policy, either because they do not make it a political priority or lack capability and resources, or because the countries of origin do not issue travel documents for diplomatic reasons or otherwise. If the legal identity of migrants is difficult to establish, this may also create major problems. The EU Commission’s proposal has been made against this backdrop.

“An overarching goal of the proposal is to increase the number of returns. The return system is the common thread connecting the different elements in the proposal,” explains Erlend.

Swift processing of asylum seekers at the external borders is intended to lead to more rapid returns, as is more restricted freedom of movement for asylum seekers. The new migration pact also contains a vaguely formulated proposal stating that Member States with good diplomatic relations with countries of origin can arrange for migrant returns from another Schengen country instead of accepting asylum seekers from them. This also indicates how difficult returns are in practice,” Erlend points out.

In his view, there are two traps in this field that researchers must avoid. Firstly, researchers must acknowledge that a well-functioning return policy is a cornerstone for the territorial control of a sovereign state in today’s world. Any asylum policy—liberal or restrictive—becomes meaningless if all migrants who wish to stay are given the opportunity to do so. Secondly, researchers must carefully deconstruct the language and logic of a growing return industry, and maintain a critical perspective in this politicised minefield.

On the whole, Norway has a relatively well-functioning return policy compared to most EU Member States, and has invested heavily in external evaluations and assignment research. Erlend believes that the experience gained by evaluating Norwegian return programmes in a migrant-centric way has provided knowledge on how such programmes work and how they can be improved.

During the last year, Erlend has been in dialogue with Norwegian, Swedish, German and Canadian authorities, as well as the OECD, about this topic. He says that the EU now craves such knowledge. At the meeting with the EU Commission he clearly stated that a more knowledge-based and realistic approach is needed in this field, and that it is necessary to look beyond the perspectives of host states.

“A successful return policy relies in part on the creation of solid legal and human rights frameworks, but we also need to understand why migrants resist being returned, follow-up those who are returned and be open to the fact that such a policy often looks different to the countries of origin,” says Erlend Paasche.